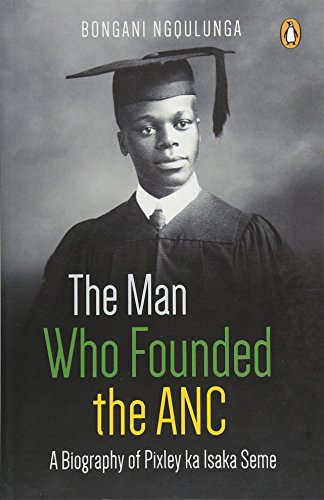 The man who founded the ANC: A biography of Pixley ka Isaka Seme por Bongani Ngqulunga

Bongani Ngqulunga con The man who founded the ANC: A biography of Pixley ka Isaka Seme

It is well known that the African National Congress was formed in 1912 and is considered the oldest political organisation on the African continent. What is often not widely known is that the person who founded it was one Pixley ka Isaka Seme, a thirty-year-old black South African from Inanda outside the city of Durban. What is remarkable about Seme's achievement in founding the ANC is not only that he succeeded where most had failed at forging black political unity. It is also the speed at which he did it. He had just returned to South Africa from the United Kingdom and the United States of America, where he had been a student since he was a teenager. In slightly over a year the founding conference of the ANC was convened and he was at its helm as the main organiser. Seme also established a national newspaper, became one of the pioneering black lawyers in South Africa, bought land from white farmers for black settlement right at the time when opposition to it was gaining momentum, became a sought-after adviser and confidant to African royalty, and was considered a leading visionary for black economic empowerment. And yet, when he became president general of the ANC in the 1930s, he brought it to its knees through sheer ineptitude and an authoritarian style of leadership. On more than one occasion he was found guilty for breaching the law, which partly led to him being struck off the roll of attorneys. This book discusses in detail Seme's extraordinary life, from his humble beginnings at Inanda Mission to his triumphs and disappointments across the continents, in his public and private life. When Seme died in 1951 he was bankrupt and his political standing had suffered greatly. And yet he was praised as one of the greatest South Africans ever to have lived. For all this, he has largely been forgotten. This biography brings the remarkable life of this extraordinary South African back to public consciousness.